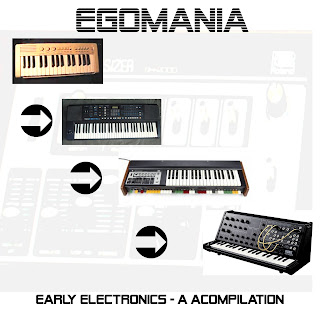 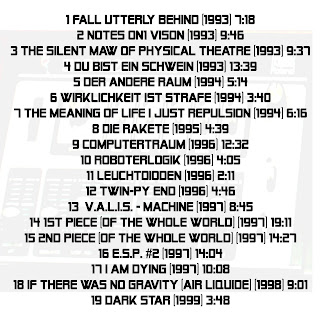 Early Electronics. This is a 2 CD Compilation out of six or seven, where I collected my earliest adventures in electronic music. The Journey starts in 1993, the year we started the Lay De Fear Experience, that wakened my interest in electronic music. before the early 90's I didn't like electronic music at all, but in the early nineties Chris of Lay De Fear lead my interest to 70's industrial music, like the early Cabaret Voltaire. The other influence in electonics is my younger brother, a DJ, who mad his way from EBM music to Techno in the late 80's. The first three tracks reflect my enthusiam for Cabaret Voltaire and the fourth track is my very first approach into techno music. Tracks 5 -8 are taken from Egomania - First. After the Lay De Fear Experience I get more and more into techno music and became a huge fan of Air Liquide a Techno duo from Cologne who worked also together with my great hero by that time Holger Czukay and  I did one of my favourite tracks of Air Liquide - If there was no gravity as a cover song in 1998.
I didn't like the complicated programming with digital equipment and got a huge interest in analog synthesizers and that lead straight to Astrosound.
And after I got tired about techno music in 2000 it lead to emptyblaukraut music. This is the start of my electronic side. Industrial Tracks, Wild Experiments, Cosmic Music and kinky grooves. you will find it all here: